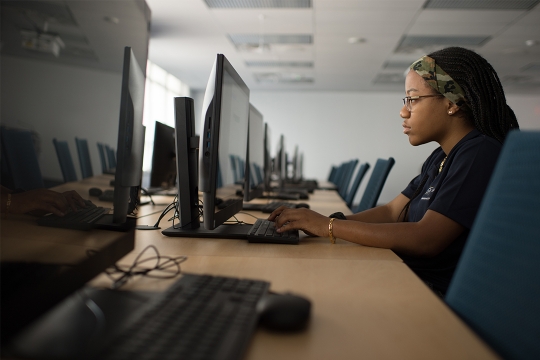 Administered jointly through the Department of Computer Science and the Department of Engineering Management & Systems Engineering, the Master of Science in Data Analytics aims to address the growing demand for professionals skilled in big data and data analytics in government, industry and research organizations.

Through courses led by top faculty members at the School of Engineering & Applied Science and the School of Business, this program is conducted in small cohorts and covers topics in computer science, business analytics and systems engineering while focusing on the foundations of analytics from a technical engineering perspective.

Students in the program should expect to:

Abe Usher is the Vice President of Emerging Technology at Radiant Solutions. Prior to Radiant Abe was the co-founder and CTO of HumanGeo, and innovative data analytics company.

A former Google Engineer and also a National Security Agency cryptologist, Abe was recognized as one of the 100 most influential leaders in Government Technology (Fed 100) for his work with machine learning and geospatial system development.

Abe received a Master's in Information Systems from George Mason University, and a BS from the United States Military Academy at West Point.

Al Di Leonardo is an experienced intelligence and special operations officer who utilized his military training to successfully found and sell two companies in the private and public marketplaces. He is widely recognized as a subject matter expert in analytical tradecraft.

Al founded HumanGeo, an innovative software and analytics company focused on technical solutions at the intersection of big data, social media, and geo-location intelligence that enables change in the government marketplace. He served as CEO, creating the vision and path to grow the team from a start-up to a recognized technology brand name within the Defense and Intelligence sector.  Since its inception in 2011, HumanGeo quickly became synonymous with technical innovation. The company developed the Defense Intelligence Agency’s (DIA) Data Analytics team called the Nerd Brigade and the National Geospatial Intelligence Agency’s (NGA) Rapid Feedback Teams. HumanGeo was routinely recognized as a Virginia Business Best Place to Work. It was named Arlington’s Fastest Growing Company between $5M-$50M and identified as among the Best Places To Work for Millennials.

In 2015, HumanGeo was acquired by the Radiant Group, a 450-person, 5-business unit technology company that supports the Intelligence Community with advanced software solutions and analytics.  At Radiant, he served as president overseeing the integration of operational technical capabilities while simultaneously implementing the mission and vision across all five business units, and grew the Radiant’s annual revenue to over $130M. In 2016, Al and Aston Capital architected the sale of The Radiant Group to DigitalGlobe.

After 20 years of combined government experience with concentration in the Intel Community, he retired out of Joint Special Operations Command (JSOC) as a career United States Army Intelligence Officer. Prior to JSOC, Al specialized as a Signals Intelligence Officer and spent almost a decade inside the National Security Agency (NSA). He earned the Bronze Star Medal from U.S. Special Operations Command for his work in Afghanistan and Iraq.

He served as the Director of U.S. Special Operations Command’s first big data analytics and innovation cell named Skope, where he became widely known across the Intel Community for his special operations team’s success with geospatial analytics. In his Army career, he served overseas in support of operations in Afghanistan, Iraq, Kuwait, Africa, Korea, and the Balkans.

Al holds a Master’s in Business Administration from Loyola University, and Bachelor of Arts from Fordham University. He is also a board Councilor at the American Geographical Society, and a Board Member at the Global Special Operations Foundation. Originally from Connecticut, Al and his wife Melissa, and their two daughters reside in Arlington, Virginia.

Andrea Little Limbago is the Chief Social Scientist at Endgame, where she researches and writes on geopolitics, cybersecurity, and data science, and directs the company’s technical content. She has previously worked in academia and at the Joint Warfare Analysis Center. While at JWAC, Andrea received the Command’s top award for technical excellence for her analytic support across the Department of Defense.

Andrea earned a PhD in Political Science from the University of Colorado at Boulder, and a Bachelor’s degree from Bowdoin College.

As a strategic consultant at industry leading Definitive Logic, I use my 26+ years of DoD and corporate financial management experience to help DoD, Federal Agency, and private sector organizations design, integrate and deploy better business systems.

Prior to joining the Definitive Logic team in February 2018, Michael served as an active duty Colonel in the U.S. Air Force. As the Director of Air Force Budget Programs in the Headquarters Air Force “Engine Room”, he was responsible for the integration and submission of the Air Force’s $144 billion annual budget to Congress. Michael holds a bachelor’s degree from Colorado State University and several graduate degrees, including a master’s degree in Organizational Management from George Washington University in 1998.

Prior to working for the NYPD, Morgan held positions across a variety of industries, including in finance at Bank of America, in journalism at CNN, and in consulting at the Scowcroft Group, a
high level strategic consulting firm run by former National Security Advisor Brent Scowcroft. While at CNN, she wrote and produced print and broadcast content for the National Security Unit.

Dr. Rodney B. Wallace is an IBM principal data scientist responsible for directing teams of senior technology experts and IBM researchers in developing and deploying innovative business analytics within IBM Global Technology Services division to optimize and improve the quality of the services delivered to IBM clients.